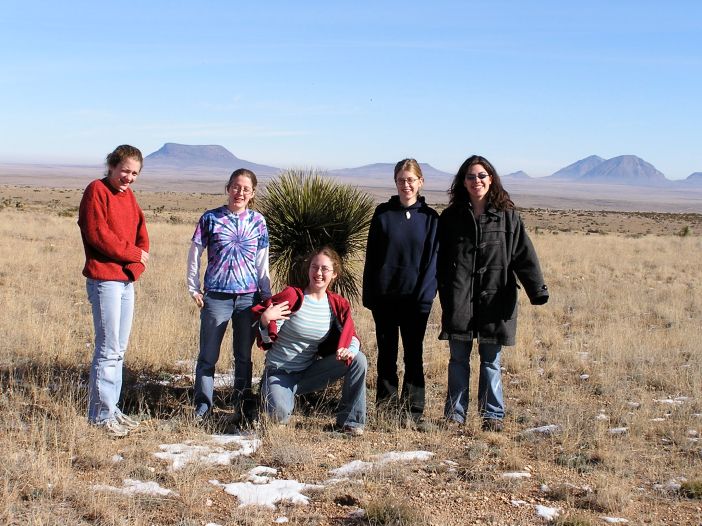 Here we are in the New Mexico desert, during that trip you all made to visit me over Christmas during my year in El Paso. It was unseasonably cold to the point that there was a little snow that was melting by this point. I’m the only one wearing a (very large) coat (donated to the place where I worked)–maybe I had adjusted to southern climes already. By the time I left the southwest I was wearing jeans and a long sleeved shirt when it was 70 out, though temps are different without humidity. What are your memories of that year that I was in Texas? Rachel and Krestia were married about 4 months previous. In this picture Martha is proudly wearing her engagement necklace from Bradley, given to her a few weeks earlier before they both returned from their semester together in New Zealand. Jewel is 16 years old and Esther is almost 13. Right?

I’ve been thinking about the border recently. Maybe because it is negative frazillion degrees here. Oh, fine. Not quite. It made it to 2 degrees today and the wind chill was only -19. But the internet tells me that it was 75 in El Paso today. I will cope with this snot-freezing, squeaky snow cold by thinking about the place where I learned what 105 feels like.  Here are a just a few of the many things I learned in my year living on the border.

1). Many things are better with lime on them. Almost every time I eat watermelon, I wish I had lime to squeeze over it. We ate Lays potato chips with lime and salsa, put lime on spicy cheetos, and on avocados, jicama, french fries, soup, fruit… I could not believe how expensive limes were when I came back to New York.

2) Dancing is about having fun. This might sound simple, but it seriously was one of the big lessons I learned there. For a long time I felt very self conscious dancing. Mennonite upbringing and all that, I suppose. In El Paso, more often than not there was some kind of music with a great beat playing somewhere in the house and almost everyone moved to it. During the summer we went to all the free concerts at the park and the dance floor in front of the stage was always crowded. I learned to move my body for the joy of doing so and the fun of being in a crowd of people doing exactly the same thing. No judging, just grooving. 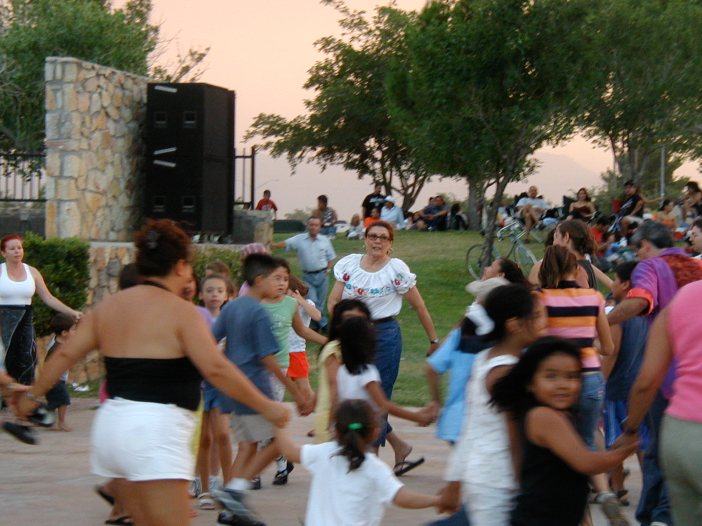 3) Tex Mex isn’t Mexican, though that doesn’t mean I love it any less. Again, simple, but you know the state (read “lack”) of Mexican food in our area. On my way home after a year of living six blocks from the Mexico border, I ordered a burrito in the airport and stared at said burrito for a bit before eating it. It was so much bigger, with so many more ingredients, than the burritos I had eaten over the last year. I could write a whole post about the food of the border. Salsa that made me cry. Horchata. Oh man, horchata. Fruit paletas. Molé. Chile rellenos. Fruit aguas. Tamales. Fresh corn tortillas. Laura’s rice that I have never been able to recreate. That rice in milk dish that I can’t remember the name of (probably arroz con leche, huh?) that I frequently crave when I get sick. Guacamole made without garlic, definitely without garlic, I apologize again to the kitchen full of Mexican women that I suggested putting garlic in guacamole.  Beans, beans, and more beans. Juevos a la Mexicana. I’m hungry.

4) I have a really fun shtick I sometimes do around Cinco de Mayo where I inform my friends that Cinco de Mayo is barely celebrated in most of Mexico and that September 16, Mexican independence day, is much bigger. I’m a ton of fun at parties. I don’t understand why I don’t get invited out more.

5) Holidays are big donation times at homeless shelters and the weirdest things get donated. We ate turkeys donated at Thanksgiving for so long, in so many ways. The 50+ large cans of hominy donated were used in several pranks between houses.

6) Immigration is a complicated issue. I knew next to nothing about it when I went down and just a little bit more when I came back. Again, this could be a full post and then some, so I’ll just say that there are a lot of  individual wonderful, frustrating, painful, amazing lives behind the topic that gets discussed at the national level. My life is better for knowing those people. I didn’t know where to begin introducing or re-introducing them to you, but I had a lot of fun looking through my pictures.

This list only begins to touch on the year. I thought briefly about staying in the southwest, even applied and interviewed for a job there before deciding to stay closer to home and you all. These ties.

5 thoughts on “Throwback Thursday: The Border”